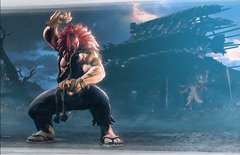 Akuma has an amazing comeback fact via his V-Trigger as well has having an all-round toolset better than every other character in the game. However, due to the large amount of tools, Akuma players need to master knowing which tools to use at the right spacing and position on screen.

Akuma's character requires you to change your combo routes depending on how much gauge he has. Pay attention to the situation and use your combos well.

Akuma has 900 HP and stun, making him a glass cannon archetype. To make up for the low health he has great tools and near unstoppable offense, if you play him well. Practice hard and utilise your V-Trigger in your offense to take the lead!